Why you should invest in the Philippines 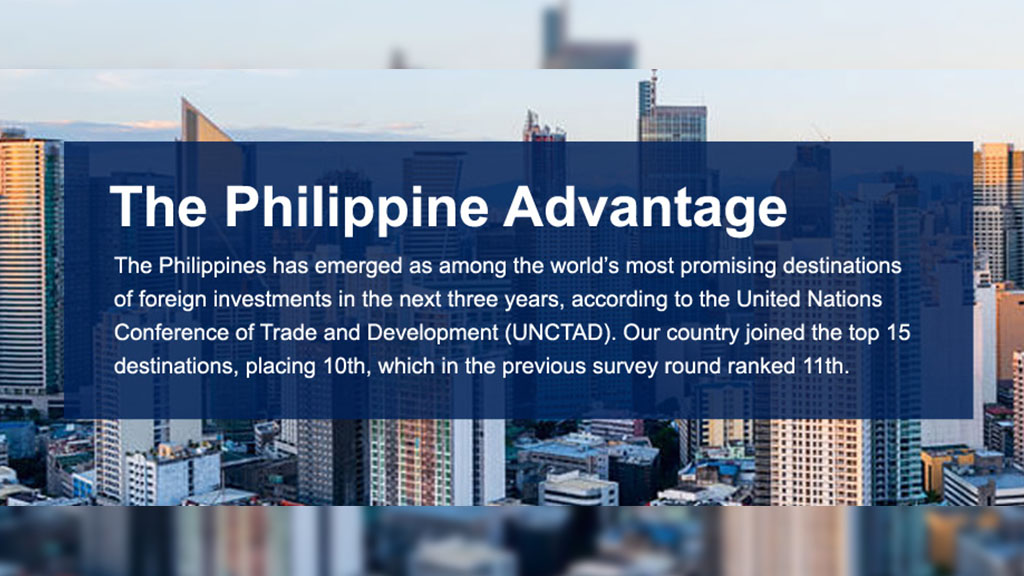 From BOI – Board of Investmensts
The Philippine Advantage The Philippines has emerged as among the world’s most promising destinations of foreign investments in the next three years, according to the United Nations Conference of Trade and Development (UNCTAD). Our country joined the top 15 destinations, placing 10th, which in the precious survey round ranked 11th.


Fastest-growing among major economies in Asia According to the World Bank’s latest edition of Global Economic Prospects, the Philippines is the world’s 10th fastest growing economy for 2017. Growth is projected to remain robust at 6.8 percent in 2017 and 6.9 percent in 2018. This growth is led by strong domestic demand, recovery in exports and implementation of planned infrastructure projects which spur additional business activities, create more jobs and increase household consumption and reduce poverty.

This website uses cookies to enable all functionalities for best performance during your visit. Should you wish to decline cookies to be sent to you, kindly adjust your browser settings accordingly. By continuing browsing this website, you are giving consent to the use of cookies on this website. See our updated Privacy Notice for more details.
I Accept
Manage consent

This website uses cookies to improve your experience while you navigate through the website. Out of these, the cookies that are categorized as necessary are stored on your browser as they are essential for the working of basic functionalities of the website. We also use third-party cookies that help us analyze and understand how you use this website. These cookies will be stored in your browser only with your consent. You also have the option to opt-out of these cookies. But opting out of some of these cookies may affect your browsing experience.
Necessary Always Enabled
Necessary cookies are absolutely essential for the website to function properly. These cookies ensure basic functionalities and security features of the website, anonymously.
Functional
Functional cookies help to perform certain functionalities like sharing the content of the website on social media platforms, collect feedbacks, and other third-party features.
Performance
Performance cookies are used to understand and analyze the key performance indexes of the website which helps in delivering a better user experience for the visitors.
Analytics
Analytical cookies are used to understand how visitors interact with the website. These cookies help provide information on metrics the number of visitors, bounce rate, traffic source, etc.
Advertisement
Advertisement cookies are used to provide visitors with relevant ads and marketing campaigns. These cookies track visitors across websites and collect information to provide customized ads.
Others
Other uncategorized cookies are those that are being analyzed and have not been classified into a category as yet.
SAVE & ACCEPT